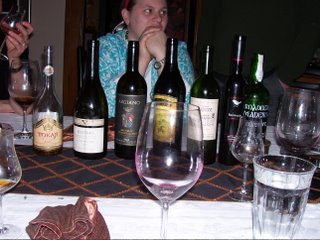 It's the holidays, time for indulgence. I pulled up to Sabrina's with two bottles of wine and a cauliflower gratin. My contributions were a Non-vintage Guy Larmandier Rose Brut and a 1993 Tokay Aszu 5 Puttonyos. Sabrina had already opened a 1995 Gruet Blanc de Blanc and a 2003 Wehlener Sonnenur Riesling Kabinett from SA Prum. Joining us were Alan and Susanna, Patrick and Tara, Hilary, Jossiene, Eric and Marc. We nibbled on Smoked Coho, King and Keta Salmon all pairing beautifully with the acidity and toastiness of the Gruet. Next we popped the Guy Larmandier. The beautiful aroma carried dried raspberries, biscuit and slate with a bracing acidity that cut through the richness of salmon AND hummus. Jossiene has been tutoring me in properly pronouncing French. She is from the Juras region of France but has lived here in the States for many years. After successfully pronouncing the Champagne label Sabrina looked at Patrick and said "We won't be able to work with him from now on". I am bad at correcting people. . .I guess. Eric pulled the leg of lamb off the grill to rest as we sat down to the table and surveyed the other bottles. Patrick and Tara provided a 1996 Chateau La Cardone Haut-Medoc (which oddly enough was predominantly Merlot), Alan and Susanna brought a 2000 Andre Brunel Les Sambiches Cotes-du-Rhone Villages, our good friend Brett (who wasn't present) gave us a 2004 Tablas Creek Cotes de Tablas Rouge AND a 2003 Treana Rouge, Sabrina whisked out of her cellar a 1995 Argiano Brunello di Montalcino and a 2005 Renwood Amador Ice Zinfandel. What a lineup!

We began with the Tablas Creek, it gave off aromas of cranberry and pomegranate and light smoke. On the palate the acid was bright but the alcohol was high. Maybe if we gave the bottle a bit more time to air the alcohol would have dissipated somewhat. The Treana, a blend of cabernet sauvignon and syrah, was big, full-bodied and packed with berry jam. The nose had cocoa, blackberries and light earth. On the palate I tasted coffee, blackberry and chocolate covered raspberries that were carried by heavy tannins. The Andre Brunel delivered heavy aromas of earth, fennel, and dark stone influenced fruit. These aromas carried over to the palate (god bless old world wines) and screamed out for the lamb.

Hitting their stride, the old world wines of the lineup got better and better. The Argiano 1995 Brunello di Montalcino gave forth barnyard, cranberry, sage and lavender on the nose. The flavors of leather, dried red cherry, and dried herbs paired well with the lamb. Each bite and sip combined into one new, dare I say transcendent, flavor. The 1996 Chateau la Cardone Haut Medoc had a nose of cigar box, cedar, dried meat and dried berries with a rich luscious finish. The palate displayed earth, graphite and vibrant tannins that lingered and lingered.

All of these wines were so amazing, rare, beautiful and engaging. They paired wonderfully all of the dishes: cauliflower gratin with cream, garlic and gruyere; sweet potato puree with rosemary; and a lovely, earthy roasted lamb studded with garlic.

After dinner we had a glorious spread of artisanal cheeses such as Cabrales (Spain), Roaring 40's (Australia) and Humboldt Fog (California). The cheeses aided in showcasing the 1993 Tokaji Aszu 5 Puttonyos from Hungary. This wine was liquid sun with layers of honey, dates, caramelized sugar, flowers. . .the list goes on. It took me some time to get over just smelling it much less tasting it. The texture and acidity carried the cheese and lifted them all to another level.

As if that wasn't enough, Sabrina had prepared an espresso tart to pair with a 2005 Renwood Amador Ice Zinfandel. This cryoextracted dessert zinfandel had acid and fruit which not only cut through the richness of the tart but also amplified the smokiness of the espresso.

This meal will absolutely go down as one of the most outstanding, exceptional dinners I've ever had. I've always felt that when you get good friends together that is the basis for everything. Everything after that is icing. The food and wine held flavors that I've never experienced before.

My friends helped me taste them. 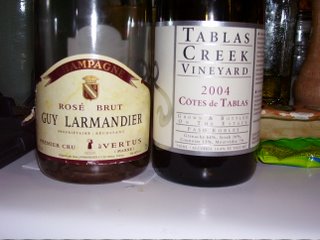 Posted by Michael Hughes at 10:18 AM 0 comments

As much as I'm glad to be in Memphis spending Christmas with Kelly and our dogs, I do wish I was in Indiana with my family. By now, my parents and I would have been headlong into our first bottle of Tempranillo. It would have been nice to watch my niece tear open her presents. It's okay. I'll see them in a few weeks.
Posted by Michael Hughes at 10:12 AM 0 comments

Check out my new article in the Lamplighter: www.cooperyoung.org/lamplighter.asp.

Sorry about the lack of a link. Something is not working.
Posted by Michael Hughes at 8:41 AM 0 comments

Sundays, as I've said before, are my days to cook. I try to do something special, not outrageous, just full of love, flavor and care. In the process of creation, I'm always paying attention to how the meal will pair with wine. What wine will go best? What flavors should I add to the dish to mirror/contrast the wine?

Recently, I had the urge to cook some duck. There were two wines I had in mind for this dish. The first was a 2004 Savigny-Les-Beaune from Joseph Drouhin. This wine has a light ruby color, elevated (but not overpowering) acidity, a gorgeous array of earth, and soft fruit profile. The second was a 2001 Chianti Classico Riserva from Luiano. The bright acidity (typical of Sangiovese), medium-full body, and berry-fruit characteristics seemed perfect for duck.

I marinated the duck legs in a dash of soy, red wine, pepper, garlic and a dash of pomegranate molasses. After a few hours of marinating, I laid them on a baking sheet and roasted them in the oven. While they were roasting I prepared some red rice, english pea pods, and a dried cherry sauce with red wine, balsamic vinegar, shallots and a dash of pomegranate molasses to mirror the marinade.

Finally it was time to test my wine theory. The acidity of the red burgundy cut through the richness of the duck, the fruit and the acid in the wine mirrored the dried cherry sauce, and the earthiness popped out to go with the gamy quality of the duck. Delicious.

Unfortunately, I couldn't test my theory about the Chianti. It was corked. Oh well, I'll just have to try it again! 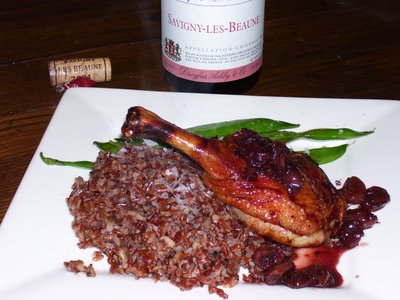 Posted by Michael Hughes at 8:16 AM 0 comments