Dinner this Thursday at Tsunami

Thursday September 25th at 6:30 p.m. we are hosting Phillippe Bourgeois of Bourgeois Family Selections at Tsunami Restaurant. Phillippe will be leading us through a tasting of his top-quality wines paired with the magnificent cuisine of Chef Ben Smith. All of the wines that Bourgeois Family Selections imports are at the very least sustainably farmed with most either organic or biodynamic. Phillippe's extensive portfolio is comprised of small family growers (one has only 8 acres) finally bottling their own wines instead of selling grapes off to larger negociants. These wines represent the value and quality of French wines prior to a decade of price increases. Cost to attend this dinner is $65 (including tax & gratuity). There will be special discounts given for orders placed that evening. Our last wine dinner at Tsunami sold out in 2 DAYS so act fast. To purchase a seat, please stop by the store or call and purchase your tickets over the phone (901.725.4252). There are only 22 seats available. Don't miss out on the opportunity to interact with the man who is importing some of the most exciting wines in the market served alongside with Chef Ben Smith's excellent cuisine. The menu is as follows:
Domaine de Ballade Sauvignon Blanc-Colombard 2006 Cotes de Gascogne

BV tasting of the century

Yesterday I was extremely lucky to attend a vertical tasting of BV Georges de Latour Private Reserve. 21 vintages were poured from 1958 - 2004. Ken Neill, who purchased a seat at the tasting through the Brooks Museum's Uncorked auction, could not attend & asked if I would like to attend in his place. Uh.......YEAH! Even if I did have plans I would have canceled them! The wines were accompanied by an absolutely fabulous 4 course lunch prepared by Chef Wally Joe & Chef Andrew Adams. Thank you, thank you, thank you Ken! Below are my notes from the tasting:

1958: ruby core to a brick-orange rim, light sediment is evident but not as much considering its age. Clarity is muddled & cloudy but typical of age. A nose, of cedar, cinnamon stick, dried cherry forest floor & almond. The palate is very elegant, light & lithe but with a lively acidity for its age, hits on the sides of my tongue with a velvet finish.

1959: light ruby core, orange-rust rim, sediment is evident. Hints at sulfur on the nose with dried plum, obviously dead. Almost pinot noir-esque on the palate with barely a whisper of spice box, hot on the finish, over.

1974: Cloudy & rust colored. The nose is sulfurous with a pungent licorice/penicillin aroma. The palate is disjointed & seems astringent, hits the hard palate, acid is in line but the alcohol is hot & out of balance.

1982: Cloudy core with a rust rim. , smells off with a pungent, sulfurous nose. Palate expresses cooked fruit with a tangy, light finish.

1985: Ruby garnet, slightly dark at the core. The nose is hot but has notes of black currant & plum. The palate is leathery, black currant, dried raspberry but falls flat on the finish.

1991: Nose of cognac, barrel spice, cedar, cigar box, leather. The palate if round, fleshy, voluptuous, spicy, coats the palate in a luscious fashion.

1992: Clean, ruby color. I found sulfur on the nose with a hint of dried berry. The palate was on the lighter side (lighter than '91) with smoky licorice with a pungent characteristic. Hits the hard palate.

1993: Nose of fill, mustard seed & cranberry. The palate is round, voluptuous, fleshy, leathery & had the most tannins of the night, so far.

1994: Spicy, anise laden nose. A rich, but not heavy, texture with a dark core of supple fruit, tea & cedar.

1995: Heavy with herbes de provence, anise & red currant on the nose. The palate is fleshy & round, big & brawny.

1999: Light aromatic expression on the nose, simple & not very interesting. Lusciously powerful & gorgeous on the palate. The finish keeps going on & on with currants & dark blackberry.

Check out yours truly in this romantically lit video.

By the way, McCrea is spelled wrong (sorry guys!).
Posted by Michael Hughes at 11:59 AM 0 comments

Check out my new article here.
Posted by Michael Hughes at 11:57 AM 0 comments 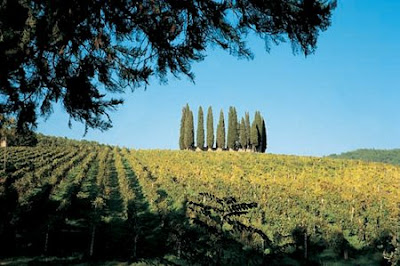 Nothing better than aged bubbles 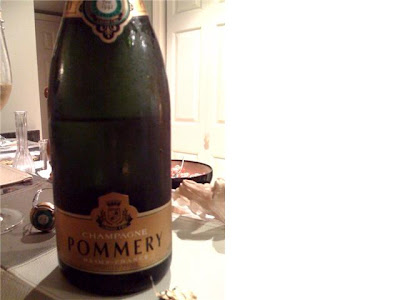 So I wasn't feeling that well at work on Saturday. All at once I felt nauseated & as if my batteries had run down. After a few hours of keeping myself moving & hydrating I started to come back to life. As much as you all might think, no I was not hungover! I'm not sure what was wrong with me. Richie was concerned not only for my health but also for our plans. We had planned to convene at his condo with our significant others to taste some wine & cook up a tasty meal. Well, after coming back to life, we were back on track. We both were ecstatic to discover that a well aged bottle of Champagne was tucked into the bubbly cooler. Pommery Brut 1992! What a find! We were eager to pop this little beauty open. I downloaded a program called WinePad to my iPhone so I took this as an opportunity to give it a run. The wine poured a rich golden hue with a distinctive clarity, & slow, tiny bubbles. The aroma gave off apricot, nuts, toast, brioche & orange peel with notes of chalk. Richie shouted "it tastes like a triple cream cheese!". In fact it did. It also had flavors of apricot jam, macadamia nuts, artichoke & a lengthy palate that still had so much vibrant acidity.

I love it when we find hidden little gems.
Posted by Michael Hughes at 7:34 AM 5 comments