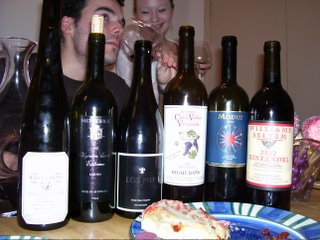 Last week some wine loving friends and I gathered together for a tasting. We've been trying to host them on a regular basis but invariably something comes up with someone and we have to postpone. Oh well. Bryce, Elizabeth, Michael and I went over to Richie and Megan's apartment to pop some bottles. Richie had already decanted a 2002 Henschke Keyneton Estate Euphonium Shiraz. It had been resting peacefully in its gorgeous glass container, waiting to be drunk. He had also opened a bottle of 1999 Modus Ruffino to let it breathe and blossom. We all were anxious to taste this particular bottle because the 2000 vintage that Richie brought to an earlier tasting was corked. He had taken that bottle back and had it replaced with the '99, which, according to critics, was a much better vintage.

We started off with Michael's bottle, a 1998 Marcel Deiss Gewurztraminer from Alsace. It had a beautiful nose of peaches and jasmine. The mouthfeel was voluptuous and creamy with bright acidity and tasted of honey and ginger. Gorgeous wine, absolutely gorgeous. Pair this wine with gorgonzola or some other salty blue cheese.

Next up was the '99 Modus Super Tuscan. I smelled red raspberry, red pepper and fennel. On the palette was a strong flavor of leather and earth with balanced acidity and firm tannin. Pair this wine with strawberries or prosciutto. The berry flavors complement the strawberry and the earthiness mirrors the earthy flavors of the prosciutto.

Then we tasted the bottle I brought, 2002 Anderson's Conn Valley Vineyards Right Bank. This particular wine is a blend of cabernet franc and merlot. It had been quietly blossoming in the decanter that Michael brought (thanks Michael) while we were enjoying the two previous little gems. The reason I brought this wine was completely based on Michael and Richie's reaction when I suggested previously that I might bring it. They both grew HUGE grins on their face and grunted "Yeah, yeah, yeah bring that!" Okay, back to the wine. On the nose there were violets and cinnamon and hint of sweet vanilla. The taste was all sweet fruits, figs, plum; with medium tannins. TASTY TASTY TASTY! 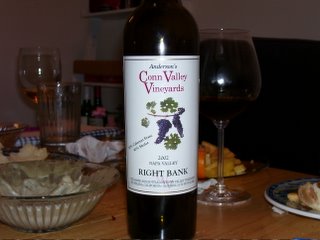 And then we tasted the 2000 Clos Mimi Bunny Slope Vineyard Syrah (Thanks Mr. Burhop!). I was especially psyched about this wine since I've lately been drinking, and loving, syrah. The nose had hay loft notes, cedar, and what I said smelled like a berry bush in the center of a briar patch. The taste was a bursting mouthful of raspberries. I definitely think this wine could still age some more and it would still be KILLER.

Continuing with the syrah lover's wet dream, we tasted the 2002 Henschke Keyneton Estate Euphonium Single Vineyard Shiraz. It poured forth scents of chocolate, black cherry and pie crust. I could taste coffee, blueberry, earth and chocolate. In my notes I wrote "Very F***ing good"

Last of the night was a 2002 Williams Selyem Russian River Forchini Vineyard Zinfandel. On the nose was stewed fruit, raspberry & blueberry compote, and rich dark cocoa. The taste very closely mirrored the nose. I was extremely impressed. This wine was the perfect ending to a stellar tasting. 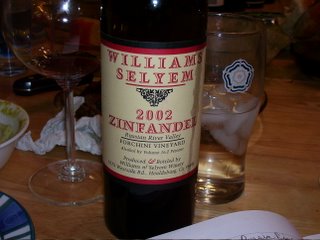 Thank you, Richie and Megan, for hosting this awesome lineup. And thank you Michael, Bryce and Elizabeth for the KICK ASS bottles you contributed.
Posted by Michael Hughes at 9:08 AM 0 comments

For those of you who have not visited the Winchester Farmer's Market (at the corner of Kirby and Winchester), you are truly missing out. I took my good friends Richie and Meagan out there for the first time and they were amazed. It is so energizing to be around people who are culinary "addicts" such as myself. The three of us were hopping around the store like kids on a sugar high. Our jaws were permanently dropped as we marveled at the foreign treasures. Beautiful, but odd, products such as whole dried octopus and canned cuttlefish made me want to run home with an armload of groceries and cook. I was so inspired by all the fresh produce. 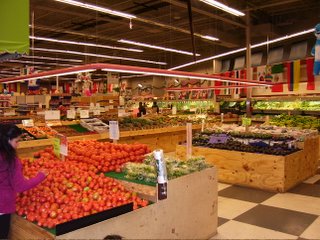 It is truly awe inspiring to see the vast array of fresh fruits, veggies, herbs and spices. All of you who love cooking and love food need to visit the Winchester Farmer's Market IMMEDIATELY! 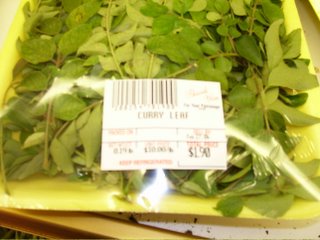 They have curry leaf for crying out loud!
Posted by Michael Hughes at 9:23 PM 0 comments

Wine is, without a doubt, better when you share it. I'm constantly amazed at how people I don't even know will open up to me and share. At Bluefish last night a guest brought in a bottle of 2004 Ken Wright Cellars Carter Vineyard Pinot Noir. The gentleman who brought it in was nice enough to pour me a taste, and I'm very glad that he did. Unfortunately, I wasn't impressed. It tasted off balance, hot, slightly astringent, and just generally unpleasant. I was very disappointed. Ken Wright is supposedly THE MAN when it comes to Oregon Pinot. If this is a reflection of his other 2004 bottles, then I don't plan on purchasing any of them. I OF COURSE didn't say any of this to the man who shared it with me, because I didn't want to seem rude. He seemed to enjoy it and I didn't feel it necessary to spoil that. Why should I?
Posted by Michael Hughes at 7:48 AM 0 comments

My wine loving friend, and co-conspirator, Sabrina and I decided to have a Super Bowl of Syrah. Neither of us care about football but we did want a reason to drink good wine. We had hoped it would be a larger affair with more people, but gradually our friends cancelled on us. That didn't stop us from popping some bottles. With it down to just myself, Sabrina, her husband Eric, sister in law Hillary, and brother in law Marc; we made it a blind tasting to add another layer of intrigue. Sabrina prepared an AMAZING braised beef stew with luscious creamy polenta. I made a blue cheese pyhllo napoleon topped with a dried fruit and port compote. 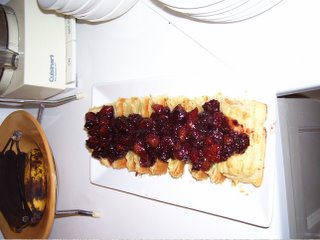 Both dishes paired wonderfully with the syrahs. While we were digging in to the lovely spread, Eric wrapped the bottles in brown paper bags and began pouring. Sabrina pulled out some tasting sheets for us to make notes on. It was a lot of fun and a real exercise on my palette. The first wine threw me at first. The fruit that was so evident led me to believe that it was new world. But the slight funk and earth on the nose made me think it was new world. After careful consideration both Sabrina and I guessed old world. This wine was Mas De Aveylands from the Rhone Valley of France. We were both correct in the region but wrong on age. We guessed 2-3 years of age but the wine was actually vintage 2000. The second wine was obvious from the start that it came from the new world. I guessed Central Coast California, but it turned out to be Renwood Sierra Series Syrah from Sierra Foothills area. The third really threw me. From the start I couldn't think it was anything BUT an Australian shiraz. It had the concentration, fruit and extraction of an Australian. Or so I thought. This wine was actually a 1999 Jory Syrah from Monterey County California. Even though I was wrong on my guess I still have to say that this third wine was absolutely stellar. Go buy it now. I saw it at Joe's, but PLEASE save me a bottle. The fourth wine was rich and full bodied, but not quite ready to be drunk. Sabrina likened it to a teenager who was rambunctious, untethered, and unsure of itself. It will be ready to go in a few years after it settles down. Go grab a bottle of Novy Garys' Vineyard Santa Lucia Highlands Syrah from Great Wines and Spirits and lay it down for 2 years. You'll be glad you gave it time. 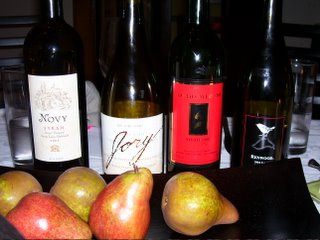 Thanks Sabrina!
Posted by Michael Hughes at 7:42 PM 1 comments

Last Wednesday Kelly and I tried to go to Encore but unfortunately they were closed for a private party. I'm actually glad they were closed because we ended up having much more fun. We decided to take a culinary tour of downtown Memphis. We started at Bluefin where I had a glass of Crios of Susana Balbo Malbec Rose. It had wonderful fruit and a crisp dry finish. We split the Rock Shrimp Risotto which was absolutely delicious. The shrimp were tender and the risotto was rich and creamy without being heavy and overpowering. Chef Robbie Alexander brought us out a fabulous Wagyu beef London Broil. It was cooked to a perfect rare with a slightly sweet drizzle and a spicy polenta cake. I urge everyone to get down there IMMEDIATELY. The food is fantastic, the wine list has everything for everyone, and the decor is modern Tokyo hip. This restaurant is a perfect addition to the Memphis dining scene.

After leaving Bluefin we headed to McEwan's. This place is always ALWAYS good. I ordered Kelly a glass of Ferrari-Carano Syrah and a glass of Matanzas Creek Sauvignon Blanc for myself. We split the Buttermilk Fried Oysters and BBQ Duck Enchiladas. Incredible. The oysters were lovely and crisp on the outside and tender on the inside. Wonderful. The duck enchiladas are purely decadent. Rich, smoky, tender with a slight hint of spice. I could live off them if I wasn't afraid of blowing up. Our friends Wendy and John, who had just finished dinner in the other room, joined us for another glass of wine. We all headed out into the chilly Memphis night and bounced on over to Felicia Suzanne's for one last drink. Our bartender, Caroline, was lively, funny and sweet. Kelly decided she was his new best friend.

Next time you dine out, pick three restaurants that you like, or have always wanted to visit, and go enjoy them all. Have a glass of wine and an appetizer at each place. Maybe even do a course by course dinner; have an app here, salad there, dinner at another place, and dessert at another. Sample the culinary culture of Memphis!
Posted by Michael Hughes at 1:30 PM 0 comments

There is a wonderful article in the San Francisco Chronicle (www.sfgate.com) about young sommeliers in the bay area. It is very energizing to read about these individuals who discovered the secret early on. To be truly happy in this world you have to pursue what you are passionate about. Does anyone know of any sommeliers living and working in Memphis?
Posted by Michael Hughes at 4:00 PM 0 comments

In today's New York Times Penfolds' winemaker Peter Gago discusses the sibling rivalry between that label's St Henri shiraz and the more prominent Grange. The article is a great read. More importantly, it quotes the price on St Henri as $50. After a quick call to Great Wines & Spirits I discovered that they have the 2001 vintage in stock for $30. Run fast because I plan to buy one of the two remaining bottles. On your mark, get set, GO!
Posted by Michael Hughes at 8:24 AM 1 comments