I have driven by the Ethiopian restaurant Abyssinia for the entire 8 years that I have lived here in Memphis. I've always been curious about it but I've never made it in. Becca & Lee called & asked if they could take Kelly & I there for a belated birthday dinner. Becca tempted even further by promising to bring a bottle of Chateau Musar 1998 Bekaa Valley, Lebanon. This is one of my absolute favorite wines & from what Becca said it would pair well with the cuisine. I decided to bring along a bottle of Weingut Knoll Ried Krietles Smaragd Gruner Veltliner 2005 Wachau, Austria. When we walked in the door of the restaurant, the first that hit me was the overwhelming aroma of toasting spices. Mmmmmm. The gruner was deliciously bright with fresh acidity & a nutty flavor profile from the bit of age on it. I ordered the lamb which was stir fried with Ethiopian spices, garlic & big chunks of onion. The smoky spice & texture of the lamb was perfect with the Musar's earthy gamy depth of darkness & gripping tannins. Ummmm. I always find it interesting that when I mention Musar is from Lebanon most people just throw back a big "?". But if you think about it, that part of the world has been making wine since the beginning of time.

Yes its true dear readers. Joe's Wines Octoberfest Big Beer Tasting on Thursday October 23rd is SOLD OUT. Too bad so sad but seriously.....when are you going to learn to buy your tickets early????? All the good events always sell out so learn from this & buy early.
Posted by Michael Hughes at 6:15 PM 0 comments

A Total Lack of Journalistic Integrity

I just received this email from one of my most favorite restaurants. It pains me to see one of our esteemed (I'm being sarcastic here in case you can't tell) local journalists attack locally owned, small family restaurant that is passionate about what they do & strive to give their customers an experience they can't get elsewhere. Read this & then email that hack who calls himself a reporter Here's his email address: blunn@wmctv.com:

Hello Everyone!
You may have heard that recently Napa Cafe received a 69 on the health inspection and I want you to know what a bogus score it is. We have always scored in the high 80's or low 90's. The critical violations were: front door was open (while the servers were setting up the outdoor tables), the butter was at room temperature (softened for the table bread), and our dishwasher came in from outside and did not go straight to the sink to wash his hands-( he stopped to pick up the empty lettuce box that the cook had just emptied). These 3 deductions resulted in 15 points! The other points deducted ranged from no label on the pecans( in clear ziplock bags )to brooms stored on the floor and not hanging. The inspection was conducted 15 days ago and they reinspected only to bring it to an 85 which is the most they could possibly give me with the system they have in place. I want to assure you that we take health regulations very seriously not because of a score but because I want a safe and healthy environment for all of my employees and all of my customers.
The inspection process has always been unsettling. The inconsistencies are alarming to put it mildly. The rules change without notice and each inspector has their own interpretation of these rules. I have to admit that it wasn't until this recent score did I decide to get proactive.
I received an e-mail from the Memphis Restaurant Association yesterday regarding the meeting they are having with them today. The inconsistency is such a huge problem regardless if a restaurant fails or not.
And to add fuel to the fire Bill Lunn from Channel 5 could not wait to report that an East Memphis upscale restaurant was going to be on his segment. He did not contact me for a statement.
I appreciate your business very much and if you have any questions please contact me.
Sincerely,
Glenda
901-683-0441
*The e-mail sent by the Memphis Restaurant Association.*
Posted by Michael Hughes at 8:18 AM 4 comments 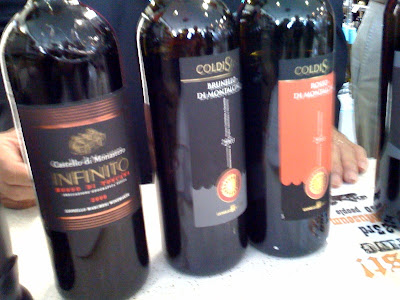 I'm not gonna lie, what's the point? You read this so you know. I am absolutely infatuated with Italian wines. This week I met & tasted with one of my idols, Lionello Marchesi. His love of the sangiovese grape is evident in his sublimely beautiful wines. I truly admire not only the exquisite quality of his wines but also his focus on showcasing this beautiful grape at all price points. As much as I hate to admit, we are in an economic crisis. Its nice to have options in the wine world across all price points. Lionello started me with his basic sangiovese 2006 (approximately $15 retail). The color was typical of the grape, dark ruby with an orange-red tint at the rim. It had the traditional nose & palate of Italian spice & cranberry. Next up was the Chianti Superiore 2006 (approximately $18.99) a classic example of the great Chianti 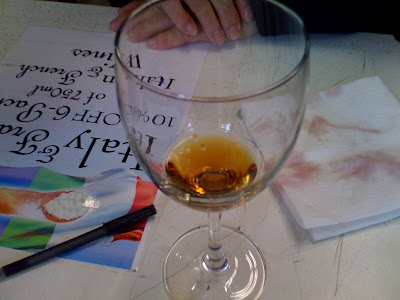 district. It was on the darker side for a Chianti, but expressed the spicy clove, fennel, red berry nose I've come to expect from that region. The palate had significant weight & grip with a lusciously dark flavor & a bright beautiful acid. The next to be poured was a 2005 Chianti Classico Riserva (approximately $30.99). It was a dark, velvety beauty with supple tannins, licorice & black fruit flavors. Next was the 2005 Rosso di Montalcino ($?). As you fellow cork dorks know this is the baby Brunello. The Sangiovese Grosso grape used for Brunello is aged for less time & then released as Rosso di Montalcino. Its a perfect wine for an introduction into the beauty that is the Brunello. The Rosso has excellent concentration, a dark viscous texture with a smoky clove, fennel & dark licorice aroma & flavor. The tannins were pronounced due to its youth but they were integrated enough to be balanced.

I could hardly wait to get to my baby, the Brunello di Montalcino. I was a bit apprehensive about it given that it was a 2003 & that vintage was excessively hot all over Europe. That heat led to a lot of wines expressing roasted or cooked fruit nuances which to me overpower a typically elegant & balanced wine. This was not the case with this wine. Marchesi explained that his Brunello vineyards were very high up & their altitude saved them from being subjected to the monstrous heat of '03. Its color was dark purple with a red/rust tint to the rim. On the nose were aromas of fennel, clove, smoke, blackberry & a violet note. The palate was rich, supple bodied, ripe with layers & layers of sensually textured tannins & dark fruit. This Brunello didn't disappoint at all, it had a finish that just wouldn't let go. It kept going & going & going & left a lasting impression of dark spice & black fruit & a hint of soil as well.

Go out & support the economy! Buy a Brunello!

Posted by Michael Hughes at 7:45 AM 1 comments 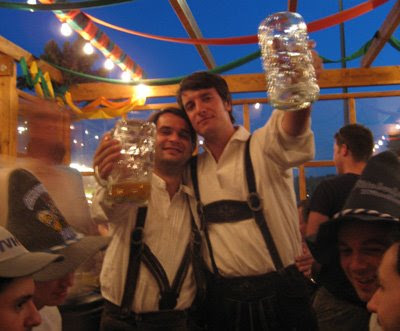 Octoberfest in October, not September like it normally is. On Thursday October 23rd Joe's Wines is hosting an Octoberfest beer tasting at the Cotton Museum (65 Union Avenue) in Downtown Memphis. They will be pouring approximately 25 beers for sampling alongside some hearty Autumn fare. Tickets are $20/person. To purchase a spot, you may stop by the store, 1681 Poplar, or call 901.725.4252. For all you beer fanatics out there, this is not a tasting to miss. All your favorite craft breweries will be represented alongside some new houses that are just now being represented in Memphis. There is limited space available so act fast! Beer, brats...what else could be better??
Posted by Michael Hughes at 10:46 AM 0 comments 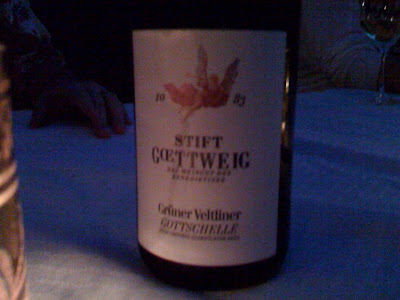 As readers of this blog know, I am an absolute sucker for Austrian wines. Totally in love, can't get enough, can't live without, enamored....all that.

Stift Goettweig has been producing wine for, oh about forever. They are producing some of the best gruner veltliner out there. At approximately 14% alcohol the Gottschelle gruner is among the ripest styles on the market. If it was a Wachau it would definitely be a Smaragd designated wine for sure (meaning the ripest). In the glass, this wine is richly golden with a viscous quality as it swirls around. The nose is laden with lemon & lime peel, slate, chalk, limestone, apricot & peach skin. On the palate is a rich texture, vibrant acidity, flavors of white peach, lemon curd & only hints of the residual sugar that the ripe alcohol level implies. The finish just sails on & on & on....& on. This is a wine that lingers for days. It would be perfect with bouillabaisse, seared scallops on a white bean & garlic saute, or shrimp & grits.

At $32.99 (at Joe's Wines in Midtown) it is on the more expensive side but there is absolutely no doubt in my mind that its worth every single penny.
Posted by Michael Hughes at 8:31 AM 2 comments 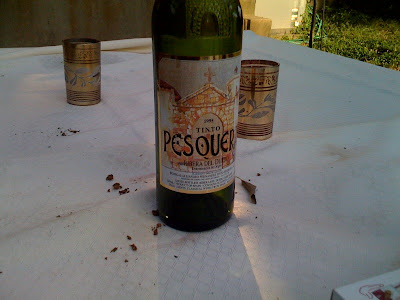 What better excuse than a birthday to cook up something delicious & pop open wines that I've been DYING to open. In honor of Richie's 28th bday, I braised some free range lamb shanks in wine, stock, celery, onions, garlic, tomatoes, basil & oregano for about 9 hours. I took the lamb out of the braising liquid & reduced it by 2/3 to make a rich & savory sauce. On the side I served cauliflower that I roasted in the oven with cream, wine, garlic & onions. It almost came out like risotto. This meal called for something special, something earthy & spicy. So I popped open a 1995 Tinto Pesquera from Ribera del Duero, Spain & a 1997 Paterno II from Azienda Agricola Il Paradiso in Tuscany.

The Pesquera was laden with a mysterious spice & dense with earthy aromas. It smelled of dark, dried soil & rocky clay. The aroma was thick with clove, cinnamon bark, dried fennel seed, lavender & dried plum. The palate had mellowed over time. I could tell that upon release this baby was a little monster. Its tannins were soft & near disappearing, but when sipped with a bite of lamb, oh ....my. A wonderful pairing. The wines dried fruit & spice played off the gaminess of the lamb in a terribly good way.

I thought it couldn't get any better, but then I tasted the 1997 Paterno II. Oh....my....goodness. I haven't lucky enough to taste enough wines for so called "Classic" vintages. Not as much as I would like anyway. If this wine is any indication then everything you have read about the '97 vintage in Tuscany is without a doubt true. The first sniff of my glass was thick with barnyard, which gave way to fennel spice, viole 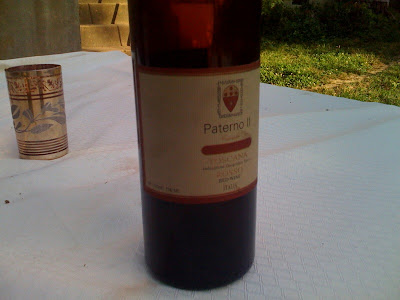 t, rosemary, dried currant, light graphite....it just went on & on! On the palate was a rich, super supple texture that caressed its way across & up & down my mouth. It gave flavors of blackberry, basil, clove, cinnamon, dried thyme, smoke & dried cherry. The finish just kept....on.....going. I was sad when I finished my glass. Because I knew there was no more to be had.
Posted by Michael Hughes at 3:00 PM 1 comments