Recently I drove down to Baldwyn, MS to lead a wine tasting at the Old Post Office restaurant. Jim Davis, CFO of Stanford Financial Group is a native of Baldwyn and has reinvested in the town by opening this restaurant as well as a design shop across the street. The town itself lies in two counties. The county line runs straight down the center of Main Street. The Old Post Office is on one side of Main and the shop is on the other. One county is dry and one is wet. Obviously, the restaurant is on the wet side.

My friends Patrick and Deni Reilly (who are opening The Majestic Grill in the old Gordon Biersch space in downtown Memphis) brought me down to Baldwyn to lead this tasting. Patrick and I decided it would be fun to theme the tasting "Old World vs New World". We tasted a 2002 Barton & Geustier Loire Valley Vouvray, a 2000 Pine Ridge Napa Chardonnay, a 1996 Chateau Gloria Bordeaux, and a 2001 Duckhorn Napa Valley Merlot.

The crowd had never really experienced a wine tasting format before and most were very eager to learn and interact with me. I had maps and printouts to show tasters so that they would have a frame of reference of where the wines came from. The food Patrick had prepared really paired well with different wines. I instructed the tasters to try the Shrimp Dill pastries with the Vouvray, the Smoked Salmon toasts or the Baked Brie with the Chardonnay, and the smoked duck with cherries with both the Merlot and the Bordeaux.

All in all everyone had a wonderful time and I can't wait to do it again. Opening up people's minds, and mouths, to new flavors is always so rewarding.
Posted by Michael Hughes at 12:57 PM 0 comments

Sorry it's taken me so long to post again but I've been a bit busy.

Back to San Francisco. 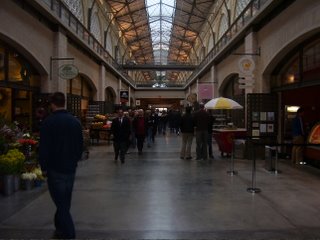 On Friday we went to the Ferry Building down on the bay. Every foodie and culinary explorer in the world owes it to themselves to get there NOW! The building is packed with stalls, stands, storefronts and cafes that the mere sight of electrifies the tastebuds. The Slanted Door, the perennial vietnamese favorite, has relocated to the building; and The Cowgirl Creamery has an outpost here. At one point I had to stop and rebalance myself because my head was near explosion due to sensory overload.

We picked up some sandwiches at Lulu Petite and sat down at the Ferry Building Wine Bar for some vino. My sandwich was INCREDIBLE! I ate blood orange and tomato braised pork with fontina on ciabatta bread. Wow wow wow. It paired perfectly with the Gruner Veltliner we ordered. I truly could have stayed in that building all day long. 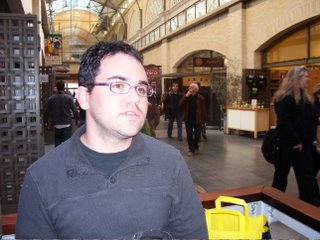 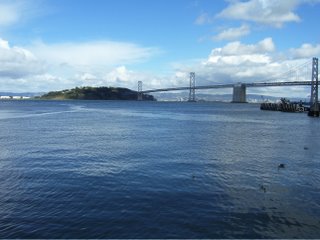 We descended into San Francisco International Airport after a horrible flight, and wandered into beautiful weather. It's absolutely imperative for someone involved in food and wine to travel. No matter where you live there are always exciting tastes and flavors to be explored elsewhere. These trips are necessary for inspiration. As I was saying, the weather was beautiful so we made a short trip to Cori and Joel's apartment to drop off our bags. We then walked next door to Le Zinc to sip wine and snack on the patio. I drank a sparkling rose from Burgundy, Kelly had a Rhone Valley red blend, and Joel had a Loire Valley sauvignon blanc. We split duck and pork rilletes, lamb sausage and Morbier cheese in a crepe, and crispy Camembert drizzled with truffle oil. Absolutely killer!

Cori joined us after returning for work and we set off for Cha Cha Cha, a Latin American restaurant in the Haight-Ashbury district. We split a pitcher of sangria (almost as good as my mom's but not quite) and settled into a table in the middle of the PACKED front dining room. Even though we were squashed into a small table right up against two other tables, we were having such a good time that we quickly forgot how cramped we were. The restaurant has the coolest Central American religious altars I have ever seen. They are literally everywhere in the place. 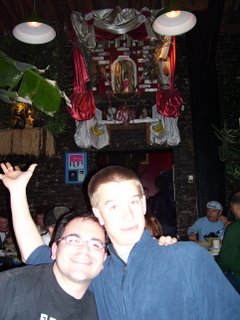 We dined on ceviche, pork quesadillas and plantains. The ceviche was hauntingly good. It was packed with octopus, shrimp, fish and scallops. I have never in my life had octopus so tender and succulent. Kelly was a little wary of it but oh well, more for me. The pork was slow cooked to perfection and seasoned beautifully. Our plantains were sweet but not cloying, and even though they were fried they were not greasy at all. They served them with a deliciously creamy black bean sauce that I literally could have poured all over myself, it was that good! After polishing off another pitcher of sangria we headed over to the Fairmont Hotel for some tiki drinks at the Tonga Room.

The Tonga Room is wild. Seriously. We felt as if we were in Bora Bora on some patio bar. It has a small lagoon where it rains and thunders every 20 minutes. They also have the stiffest drinks in town. Kelly and I shared a Lava Bowl before he and Cori shaked their groove things to the Polynesian cover band. It was soooo much fun. If you go to SF, be sure to go to Cha Cha Cha for dinner and Tonga Room for drinks. 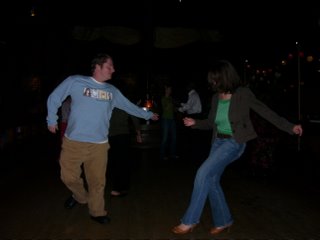