Grilled Cheese Not Quite So "Top Chef" style 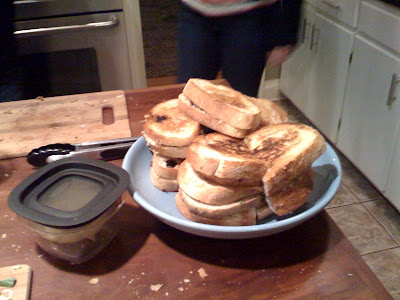 The great cheese off has came & went. Last night Justin & I battled it out in a hardcore grilled cheese throwdown......ok not really hardcore, just fun. We had been discussing this contest for quite some time. From the get go I knew I wanted to do something with a gouda style goat cheese. I don't know why other than the fact that I LOVE gouda goat. I was considering a second grilled cheese, something sweet rather than savory. However, I just couldn't come up with anything at the market. So, I picked up some Mahon cheese from Spain to complement the gouda. I grabbed an avocado as well. The unctuous texture of the avocado, I speculated, would work well with the cheese. Earlier in the day I caramelized some onions in hopes that they would add some sweetness & depth the sandwich. 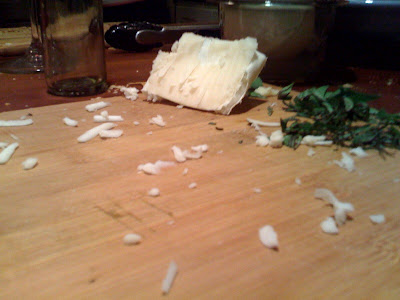 Upon arriving at his home, I discovered that Justin had similar ideas. He had caramelized onions as well, but added extra punch with sage & rosemary. Hmmmm....this was going to be a tough one. As we unpacked our goodies, Amy poured both Kelly & I a glass of wine. Justin & I both got to work grating cheese, I sliced up my avocado & bread. I chose a roasted garlic boule & Justin decided on a large French bread. We both layered our fresh breads with the goodies & got to griddling. After they were significantly golden brown we sliced them up & served them to our significant others, & ourselves of course. I gotta tell you, it was tough going up against Justin. No matter how fun it was, & it WAS super fun, part of me did really want to win. But I had to give it up to Justin. His grilled cheese was packed with flavor, his caramelized onions packed some serious richness & sweetness. They added so much. But the biggest factor was the all important "gooey" factor. It is paramount that a grilled cheese has serious goo. My grilled cheese, while delicious, just wasn't gooey enough. Oh well! This "cheese" off was too much fun.
Posted by Michael Hughes at 1:25 PM 3 comments

Get out & eat! Dine in Memphis' amazing independent restaurants now! Help them survive this economic crisis & really couldn't we all use a good meal right about now??

I don't want to turn around & see that some of the best restaurants I've ever dined have closed their doors. These people are our friends, neighbors, relatives, etc. Places such as Restaurant Iris don't just provide food & drink they provide an experience, something you'll never forget.

Don't forget about them now when they need you the most. Support what makes this city great! Get out & eat in our independent restaurants!!
Posted by Michael Hughes at 6:59 PM 0 comments