Things I can't live without:

This list could go on and on, but I think it's starting to get out of control.

What can't you live without?

Posted by Michael Hughes at 11:32 AM 2 comments

Angela and Mick came over for dinner Sunday night. I decided that a mix of fussy and comfort was in order. We hadn't seen them in 3 years so I thought that something special was just right. I began by making a paste of fresh thyme, fresh garlic, olive oil, Au Bon Climat Sanford & Benedict Pinot Noir, salt & pepper. I took this paste and rubbed it all over 2 beautiful NY Strip Steaks, letting them sit for over 2 hours. With the steaks, I prepared a dutch oven full of fresh cauliflower, onion, garlic, thyme, cream, white wine and stock. This casserole roasted away for roughly an hour. Next was the salad, simple one of fresh baby spinach and a balsamic-pomegranate vinaigrette.

Kelly had just purchased a new tv and rug for the living room, so we obviously were waiting to show that off.

They arrived, finally. We quickly realized that it had been almost 3 years since we had seen each other last. Instantly we vowed never to let that much time pass before getting together again. I had a small cheese and olive plate prepared to snack on while dinner was being prepared. Two of my favorite cheeses, Croutin du Chavignol (an aged mold ripened french goat cheese) and young Manchego ( a Spanish sheep's milk cheese) and mixed Italian olives were the snack. Both the cheeses and the olives paired wonderfully with the Alfred Gratien NV Epernay Champagne that we popped open. The creamy mousse of the Champagne and its crispness paired beautifully with the cheeses. The salty olives elevated the fruit in the bubbly.

After pulling the steaks off the grill and slicing them up, beautifully rare, it was time for dinner. The cauliflower was tender and rich, a perfect contrast to the earthiness of the beef. With it we drank a bottle of 1999 Selvamaggio Cabernet Sauvignon from Tuscany. Seek this bottle out, Neil Empson Selections.

Dessert was a puff pastry tartlet filled with roasted pears, Bleu d'Auvergne cheese, toasted walnuts and honey. My theory was that it would pair perfectly with a late Harvest Muscat from Foris. My theory proved correct, the honeyed nectar-like sweetness was a perfect match for the pairs and contrasted the saltiness of the cheese. The acidity in the wine cut right through the richness of the cheese as well. Even Kelly liked it and he despises dessert wines. All the more for me.

All in all it was a lovely evening. I can't wait to see Angela and Mick again. I missed how Angela can laugh so hard that she makes herself cry. The food and wine was a catalyst for the laughter.
Posted by Michael Hughes at 9:17 PM 2 comments

Kelly has invited some friends over for dinner this Sunday and I'm contemplating what to cook. Sometimes I attempt something a bit elaborate and fussy, but this time I think it will be different. It's finally winter, my favorite season, and this season makes me want to prepare meals that wrap themselves around you. Sometimes elaborate food is no match for the warmth and comfort of a roast chicken with crisp and tender oven kissed vegetables. The whole process is enlivening. From the readying of the chicken for the oven, to the scents that drive spikes of memory into my entire being, to the succulent end product. Nothing says welcome to my home better than that.
Posted by Michael Hughes at 7:03 PM 0 comments

I've just returned from seeing a performance by Ballet Memphis. They are some of the most talented and inspiring artists I've ever seen. We are truly lucky to have creativity of this caliber in our city. What does dance have to do with wine and food? Well, creativity in every realm inspires us to think greater things and to think more creatively in our own industry. Sitting there watching these beautiful bodies sculpt a piece of art through movement inspired me to think of wine in many different ways. It made me think of the the ballet that winemakers dance with their grapes when creating a cuvee. It made me think of the dance that wine performs with food. And it made me think of how moved I can be by a truly special bottle of wine.

I will continue to support Ballet Memphis and I hope that the rest of the city of Memphis does as well. Cheers!
Posted by Michael Hughes at 4:35 PM 0 comments

Just got back from a great meal at Umai, the new asian-french fusion restaurant in the old On Teur space on Madison Ave. I searched for their website but I guess they do not have one. The space is cool and hip in a Japanese grafitti/New York vibe kind of way. The music was way too loud but it's Midtown so I guess that's expected. My friend Jeff and I split the Spinach Gyoza stuffed with a mushroom duxelle, the poached cod over choi sam in carrot curry broth and the lobster dumplings. The standout was without a doubt the Gyoza. They were moist and just firm enough with a big mushroom flavor that was cut with soy. Perfectly done. The cod was buttery and an excellent contrast to the char on the choi sam and the spice in the curry broth. The carrot's sweetness wonderfully counterbalanced the heat in the curry. The wine list was small but nicely complimented the menu and decor. Prices were good and so were the portions. Not too big not too small. They got busy towards the end of our meal, which was nice to see. Everything about this place, from the asian newspaper wallpaper in the bathroom to the warm wood bar tables and bamboo wall design, makes me want it to succeed. Check it out!
Posted by Michael Hughes at 7:35 PM 1 comments 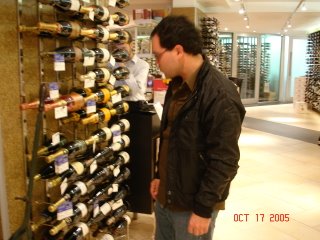 I'm watching "Mondovino" for what seems like the 15th time. This documentary is absolutely enthralling, moving, informative and entertaining. However, for some reason my subtitles aren't working so I have to watch it without. Most of the movie is in either French or Italian. But there is something about wine that transcends language. Yes I may not understand what these people are saying but I can feel what they are trying to convey. The scenery is incredible, the passion of these people is palpable. Why is it that grapes can only be grown in the most beautiful places in the world? Wine isn't just a beverage it's a food, it isn't just a food it's a philosophy. With that philosophy we can bridge differences in culture and language. I truly believe that wine and food is one of the most powerful forces on earth.
Posted by Michael Hughes at 12:46 PM 1 comments